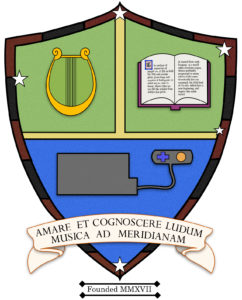 As with all ogranisations, the LSA logo was created and developed to represent the philosophy and cultural artefacts of most salience to the society.

The escutcheon forming the predominant logo features a convex curve from base to chief, with concave curves joining both the dexter chief and sinister chief to chief. The boundary colour scheme of dark brown and slate black represents the wood, leather and iron materials used in shield making by artificers throughout history. These colours alternate to avoid breaking the heraldic rule of tincture stating that metal should not be placed on metal.

There are three charges in the LSA logo. The first quarter charge is a golden lyre, based on classical depictions of the instrument associated with Apollo, the ancient Greek god of Music. In the second quarter, the charge is an open book inscribed with writing, long espoused as a symbol of learning, knowledge and scholarship. Residing in the third quarter, and what would be the fourth, is a contemporary depiction of a home video gaming console and wired controller. Not specifically based on any one console model, the straight defining lines and grey colouring (approximating argent) encapsulates a typical console depiction, with the controller’s D-pad and button representing the multitudinous controllers produced since the inception of home console gaming.

The first and second quarters’ green background (vert) combines with the golden crossbar (or), itself a derivation of both party per cross and party per pall divisions, to represent the green and gold national colours of Australia. The third quarter deep blue background (azure) in turn is reminiscent of the blue ensign of the Australian National flag.

Situated around the shield’s outer edges are four larger stars and one smaller star symbolically representing the Crux, or the Southern Cross, the southern hemisphere constellation featured in Australian vexilloilogy, symbolism, poetry and art.

Flowing across the dexter and sinister bases is a banderole in suspended flow emblazoned with the society motto in Latin, ‘AMARE ET COGNOSCERE LUDUM MUSICA AD MERIDIANAM‘.

The English translation of the Latin phrase is

To Love and Learn Game Music in the South

This maxim was conceived to both characterise the society’s principal endeavour and it’s geographical identity. No scholarly enquiry can be conducted entirely without subjectivity, and nuanced affection for, and celebration of, video game music, is similarly encapsulated in this motto.